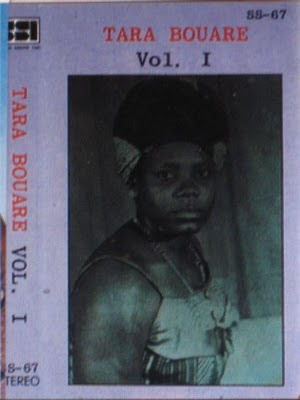 This cropped picture was taken years ago for other purposes and was found now in my computer; not complete, but something.
I know very little about Tara Bouare, and most (all) of what I do know is from brief internet searches.  She seems to be regarded as a musical pillar of Malian and Bambara culture, and has remained a vital and inspiring figure in the cultural consciousness as far as twenty years after her death in 1971 or 1972.
Dictator Moussa Traore's caravan was stopped by the now current second-term president Amadou Toumani Toure, in 1991.  At the time ATT was general of the military and his coup took place as the result of Traore's violent suppression of growing protests against his thirty year reign as head of state/presidency of Mali.  Traore's security forces opened fire on a crowd of protestors, killing around three hundred people on March 22, 1991 in central Bamako.  Apparently Tara Bouare's song Sanounegueni was somewhat of an anthem at the time*.  The translation is golden rod, and the substance of the song, I've read to be, is that no kingdom is forever.  One can imagine that during a time of favourable political upheaval and transition, such a message would be inspiring, and especially--at least from my perspective as an outsider looking in--since that message was delivered by means of a simple song by an artist who had been absent, yet apparently lingering in the public consciousness, for the previous twenty years.
Goes to show the power of song and the Malian musician!
**Interesting note: Friends in Yanfolila told me that during Moussa Traore's reign, his police forces were instructed to stop anyone from playing kamelengoni down south.  It was thought that too much entertainment meant too little work, so anyone seen playing was promptly made to stop.  This might explain the legends of late-night gatherings and dancing outside of town, of which I have no reference to direct you, but remember reading.  I wonder what (negative) effect such a policy had on the prevalence of the instrument today.**
Posted by Tim at 12:58 AM

Tara Bouare (sometimes also referred to as Tara Boré) became famous as a critic of Modibo Keita. The song you mention was directed at this president.
I'll be posting more of her work in a future post.
Unfortunately a lot of these legends are on the brink of disappearing into oblivion. So it's good to see these kind of 'rescue operations'!

Keep up the good work.

Some songs are familiar to me, probably I have heard them singing for other artists.
Thanks for sharing.

i love the feeling of this...