I received an enthusiastic request for comment capabilities, and who am I to deny?

Elvin Jones is a Jazz Machine.
Posted by Tim at 1:14 AM No comments:

A lot of you probably have spent more time in Seattle than I have so this might not be as interesting or new to you as it is to me. There's the one woman in the morning who stumbles with straight knees up to the bus stop on 19th and Thomas. Her thoughts run into each other, dealing with anything from her qualms with heroine to her dissatisfaction with Tom Cruise and Mariah Carey, and then seamlessly to her mom's friend Michelle who used to drive around with a large man in her blue Toyota that, apparently, neither this woman nor Michelle knew very well. I don't get anymore details before she segues beautifully into some of her past medical history that I think, because of confidentiality issues, I shouldn't repeat. Some mornings she's already beaten me to the stop and is sleeping curled up under the awning in her faded but not ragged black sweatpants and an oversized blue hooded jacket. I don't mind so much about the bench because she's there again in the evening, ranting, symbolically wrapping up my day as I pass on the opposite side of the street, walking back from Seattle Biomedical, twenty-five blocks west. People are already asking me about Safeway locations in the Capitol Hill area and I know of two to which I can direct them: 15th and E John, or 23rd and Madison. I prefer 23rd and Madison.
Posted by Tim at 3:59 PM 1 comment:

Today I waited for 2 hours with Elahi, my new 50-something-year-old Iranian friend, for Anonymous Girl to deliver two 40mL blood samples, each HIV negative but potentially Hepatitis B or C positive, in which case we don't care anyways, to our lab bench at Seattle Biomedical Research Institute. This link takes you to Helen Horton's site at SBRI. She is my host for my pre-Africa training and the Principle Investigator of one arm of the Immunology core at SBRI working in the Viral Vaccine Program. Briefly, I got a job that starts in September in a clinic and HIV research lab in Mali. I don't know anything about viruses beyond that if you get a lot of biologists drunk, they'll argue for hours about whether or not the viruses can justly be considered "alive." I know even less about immunology (antibodies and immune responses to anything, specifically HIV for my case).

Well, not exactly true. I'll tell you what I learned about Helen's work after my first "All Staff Meeting," held today. The opening slide-show of the meeting as people filed into the room, that was projected on a large screen almost big enough to cover the glass windows that looked out onto ground-level Seattle streets and the people passing by--who could very well be subjects of the HIV research I describe below, were the head-shots of the all the staff at SBRI. Only my second day and my picture is already up as "visiting scientist." It was somewhat comforting to me that the science and research being done really isn't too far removed from the people they aspire to help.

I pestered enough people long enough to agree to train me in HIV blood tests, cryo-preservation of blood samples that should be frozen at -80 degrees celcius within 8 hours of venipuncture, as it's called, as well as a few other important skills that may or may not come in handy in the labs in Mali. I like to imagine the lab in Bamako as any other building I saw last year in the city: mud bricks that were once sitting in rows, baking to dry in the red streets, then stacked to make a house and painted whitish-blue on the inside, but will most definitely be chipping. And the sun will shoot a visible column of light through the dust in the open window. What I don't like to imagine, though I could be wildly wrong, is the basic and limited lab equipment, un-calibrated centrifuges and pipettes, re-used tips, and data in disarray that I was already warned by the heads of the GAIA Vaccine Foundation (with whom I'll be working in the TB/HIV clinics in Mali, and through whom I got the research job in the HIV lab with Dr. Ousmane Koita) that I'll have to "extract" and "make sense of." I annoyed them too, for the past 4 months until they finally decided that I was willing and determined enough to work for them and found some extra money in their fund to throw at me for an initial 6 months of work.

Anyway, I'm training in Seattle for a few weeks and not leaving for Mali until September. These writings will deal with some science, because that's what I'm doing (I can already see Caitlin falling asleep), but also I hope to make more music recordings in the future, especially in Wassoulou, where my heart lays, as well as write about the goings-on in Bamako, where I'll be stationed for the next 6 months.

Helen and her crew, at SBRI, are looking at populations of HIV positive people in Seattle with the vision to develop possible vaccine based on the differences in immune system bits and pieces between these two groups: Long-Term Non-Progressors, and a second more basically named group, Patients. LTNPs are interesting because, while HIV positive, they show no symptoms and lead as healthy of lives as you or I for years and years and possibly till death. The Patients however, show advanced stages of HIV or have developed AIDS, and their immune system is being beaten down everyday, their immune system becomes tolerant of these foreign viral cells and fails to elicit any sort of response. So what's the difference? CD8 T cells. (And here is where my lack of knowledge will show to anyone who is qualified, but it's good enough to get the point across).

If you remember from middle school or high school or whichever school, we have red blood cells and white blood cells. Our white blood cells make up our immune response team, and that team is further divided into other classes of cells, but we'll focus on T cells. The HIV virus in the Patients group is able to take over a class of white blood cells, the CD4 T cells, and depletes them until their immune system is so compromised that a common cold could be fatal, as well as rendering CD8 T cells, another class of white blood cells, tolerant to the presence of the recently, virally infected cells. As I understand, CD4 T cells recognize foreign invaders diffusing throughout our blood but are vulnerable to HIV that will randomly be captured by receptor proteins on our defense cells and hijacked by the virus, and the CD8 T cells recognize infected cells, perhaps as a second defence. But, as in the case of the Patients, if the CD8 T cells are tolerant, they don't react. If they don't react, we have no defense. For an unknown reason and the subject of Helen Horton's work for which she was awarded another research grant, the CD8 T cells of the Long-Term Non-Progressors remain intolerant to virally infected T cells and continue to battle those sick cells and defend the castle that is our body. For this reason the LTNPs remain healthy. They can still elicit a strong immune response. And they are an interesting place to begin important research.

The internet is a cool place because scientists can search huge databases of sequenced DNA and proteins all at the click of a few buttons, rather than sifting through volumes of Cell, or Genes and Development, or Current Biology back-issues from the last 70 years, jotting down thousands of A's, T's, G's and C's to compare to your samples. Not only is that boring, it would take a million years. Helen's team is, among other things, taking those CD8 T cells and lining up row after row of sequenced DNA to look for any sort of sequence conservation or at least a place to begin investigating possible reasons that LTNP CD8 T cells can remain intolerant while Patient CD8 T cells eventually run out of steam.

HIV is tricky because it evolves rapidly and it is constantly editing and republishing it's own book so that no T cells can read it quickly enough and understand how to stop it. Helen is also aligning thousands of sequenced HIV viruses to see which parts of their book are never edited. T cells in most cases are so specific to any one part of a virus that the chances of them running into a perfect match are tiny. So in order to develop an effective vaccine candidate we should target those areas of the virus, perhaps what might code for the attachment proteins, or the directions to fuse with our immune cells, or whatever paragraph or sentence or word, out of their whole book that might remain un-edited, to develop a potentially effective vaccine for HIV in Seattle that might also work for HIV in Mali, as an example of the grand vision of a "global vaccine."

In comes my future work with GAIA VF, the Global Alliance to Immunize Against AIDS Vaccine Foundation, hence forth known as GAIA. GAIA is a Rhode Island based non-profit organization working in Sikoro district of the capital city, Bamako, in Mali, in West Africa. For those not keen on African geography: 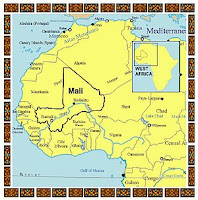 What I like about these people is that they are committed to developing and distributing a global HIV vaccine for free. GAIA, and eventually me, work closely with and employ African physicians and scientists, often educated in Europe or the States, to provide clinical activities that foster important foundational knowledge about TB and HIV in the area. They recently opened a brand new clinic in Sikoro. They have programs called Mother-To-Child, that focuses on transmission of HIV from mothers to children via childbirth and the like, and important peer-education campaigns called Here Bolo, which in Bambara, the predominant language of much of Mali and more or less understood in greater west Africa, translates to le main d'espoire, hand of hope. Each finger represents a different facet of HIV education and treatment. 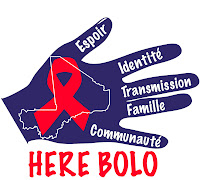 The stats that you can find on their website are pretty impressive, especially regarding condom distribution, records of patient consultation and treatment, as well as follow-up treatment. For more interesting reading search through the GAIA Blog for the med students' or the GAIA director's writings. The work is interesting, I promise.

Brief stats I learned today: Of the 35 or so million HIV cases today, about 25-28 million are in Sub-Saharan Africa. The first HIV cases in the US were published in 1981. HIV is thought to first have been transmitted to humans from monkeys as recently at 1940, probably through the slaughter of monkeys and eating their meat. Common mechanisms of acquiring HIV are through mucous membranes (eyes) so upon slaughter some blood could have splashed in their eyes, transmitting simian immunodeficiency virus (SIV) to humans, and hence human immunodeficiency virus (HIV) in humans.
Posted by Tim at 5:54 PM No comments: