Here are some more of the look and see type of thing, whereby I come up with an idea* late at night and then see if I can make it work.

First up:  I was recently gifted some cool software and tried two things at once, which I had yet to try animating: 1) a walk cycle (from 2 different angles), and 2) layering different elements on top of each other (in this case I used colored construction paper cut-outs filmed separately and layered on top of my guy strutting down the street).  It worked out pretty well and now I hope to expand on that and start doing some cooler, more sophisticated animation to the limits of my abilities.


Next, I found some really cool work by some folks named Kijek and Adamski and tried to copy one element from their animated video, Noise.  Again using a series of colored construction paper cutouts turned out to be fairly simple.  Someday I hope I have the vision to do something like this music video, which was done so simply with markers and paper.  I think they said it was something around 2000 drawings.  Check out their blog.

Then I tried to apply another of the classic principles of animation: overlapping action/follow-through, and secondary action.  My original intention was to use some of my new software to separately animated every element of the flower-faced guy (below), and so started with his flowery eye.  The video first shows the rough idea of a ball with a fox-tail floating in space and then cuts to an actual flower with a leafy tail (not the best design).  There were some slight hiccups with the software and I didn't move too far along with this. 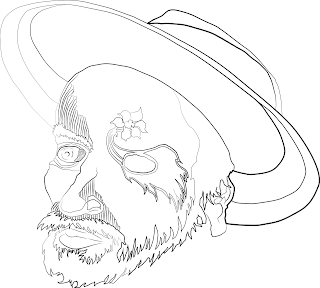 I used a series of poses from a figure drawing class and animated between them to (unintentionally) create a semi-erotic sequence of the buxom model moving between poses.  (The first few drawings are hideous).

Over the past few years my drawings evolved from single subject, limited background type of thing, into more developed (not necessarily good) multiple subject, negative space filled compositions.  I'm hoping that my abilities in animation will follow suit.  Everything I've done so far are simple, single element tests.  I'm still trying to wrap my head around making a full-on composition with at least a main subject/action layered over a background element, with camera sweeps and sound, which is to say an actual cartoon.  Even the action in more abstract sequences where there is no defined character or primary subject are boggling for me to even attempt.

On another, more musical note, I was browsing some of the fantastic African music blogs out there and noticed I'd been excised from their blog lists.  While somewhat disheartening, it makes sense.  I no longer regularly post cassettes and suppose I clutter their neat lists.  Some of you may have noticed too that a significant number of those amazing blogs have been excised themselves by Blogger for apparent copyright issues (or to avoid an issue at all).  The word on the street is that sites can be shut down at a moment's notice.  Just another way to keep us living in fear I suppose.  Some people just don't like to share.  Anyway, it's not my intention to completely cease posting K7s, just that I'd rather write about other things for the moment.

And finally, I have a solicitous ad for internet Classifieds.  If any of you out there are in a position to assist my effort I would be greatly appreciative.  I'm looking for a Research Technician position in any of the following fields:  Developmental/Cell Biology, Genetics, Global/Public Health, Epidemiology.  So far I've flooded Seattle, New Orleans, and Chicago with resumes to no avail.  I have foot-soldiers helping me out in the Bay Area, Milwaukee, and Salt Lake City as well.  (I speak French and Spanish too for you folks overseas!).  Send an email if you are able to help.