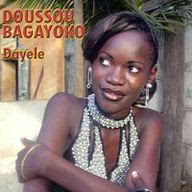 My apologies for the absence. I've been concentrating on other things recently and lost track of time.

I realize that I introduce tapes as being another of my favorites quite often, and now's no time to quit. This is another one of my favorites. Doussou Bagayoko is the daughter of Nahawa Doumbia and NGou Bagayoko. Dayele was huge in Bamako and Yanfolila, blaring from push-carts loaded with tapes and speakers, blaring from store fronts and phone booths and taxis. My friend Vieux, who ran a phone booth next to Papa's mechanic shop (pictured below) played Dayele and Black So Man's cassette over and again every day.

At that time Papa's garage was located on the main market road off the (now) paved highway in Yanfolila. Passers-by seeking shade, others needing to make a phone call, or even more waiting for their scooter to be fixed next door sit down and chat, perhaps share tea then move on. Roaring above the already maxed-out stereo is the constant revving of old scooter engines, mufflers completely blown and the motor screeching, spewing thick black smoke into the face of mechanic as he deciphers the problem. Oil pools and eventually seeps through the dirt.

The production and instrumentation on the tape are quite good, but I don't know who the musicians are. Anyone out there? And the harmonizing vocals are strong. No single song is leagues above the others, and the whole cassette is solid. I'm pretty sure that this tape, along with the "second half" are available on line as one set, while they were available as two separate cassettes in Bamako, Dayele and Koungo Sogo (to be posted later). 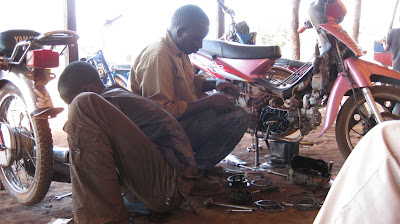 (Papa Sidibe is on the right. He and his family have welcomed me on more than one occasion and their kindness is endless.)
Posted by Tim at 1:10 AM 6 comments: