Some fly drawings. This is a stage 14 embryo, about 11 hours old, in the middle of a process called dorsal closure. At this stage there is basically a hole in the dorsal side of the fly that eventually closes as the embryo continues development. Anterior is to the left (the head is tucked inside), posterior on the right (the two dots are called the filzkorper, part of the tracheal system), ventral side down (where our lab studies wound healing, which is remarkably similar to dorsal closure), dorsal up (where the guy is pulling out DNA). 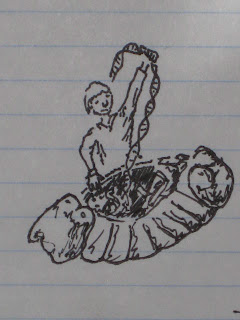 In June or so I was reading about oogenesis in fruit flies, and thought their ovaries were good for at least a few comics. 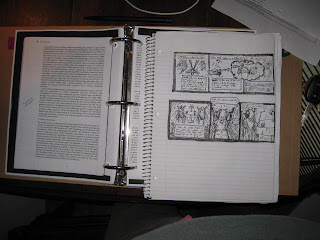 Comic 1. First, an ovary dissection. Public disclaimer: female mutilation is not humorous. When I do a testes dissection I'll draw some morbid male scientist comic to round things out. But until then, enjoy.

Things to keep in mind: 1) some mutant flies won't lay eggs, so in order to study what's happening genetically and molecularly we need to get at the ovaries, using watchmaker forceps. To make these females as happy as possible, so that their ovaries are as happy as possible, we keep them in bottles with yeast at twenty-five degrees celcius. And, 2) flies don't have blood, they have hemolymph. 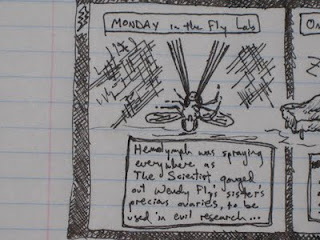 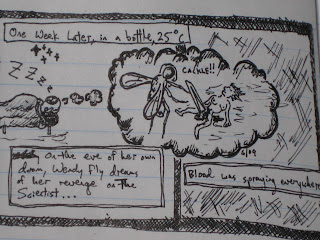 Comic 2. Other things to consider before reading: A fly ovary looks kind of like a flower that hasn't bloomed (see Figure 1). One of the green leaves that protect the petals and stamen and pistil and those other important flower parts are analogous to one fly ovariole (though the ovarioles aren't concealing anything if you peel them back but more ovarioles, the whole bunch being an ovary). An ovariole is a series of maturing egg chambers--youngest at the tip (germarium), oldest, which will be dumped into the oviduct to be layed, near the stalk.

Figure 1. An ovary and ovariole. 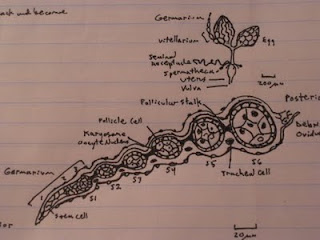 If the female flies aren't happy (not at twenty-five degrees, or not fed well with yeast) they won't lay eggs. The eggs will back-up in their ovarioles. So if you want your fly to lay, you need to feed her. Enjoy. Oh yeah, flies probably don't smoke, and they probably don't drink either, because we dump them in ethanol to kill them. 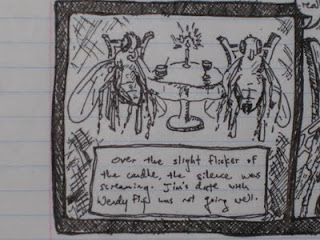 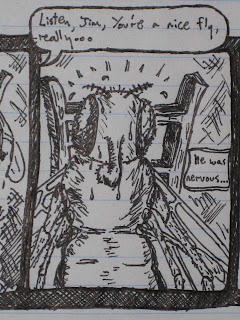 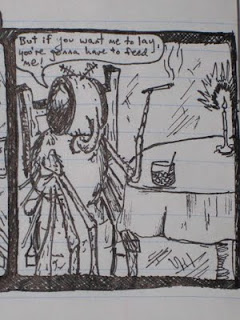 Recently I wanted to draw a farmer. This turned into a cool series: 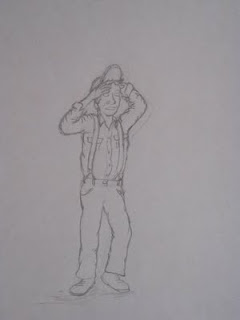 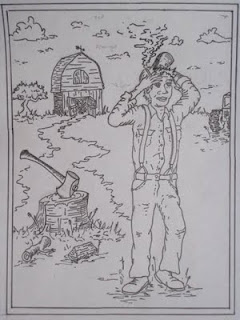 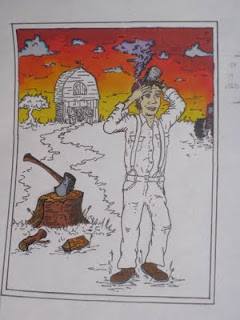 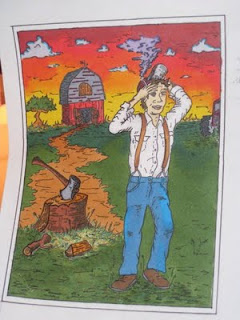 These are some of the things I've been up to lately. Mostly flies. 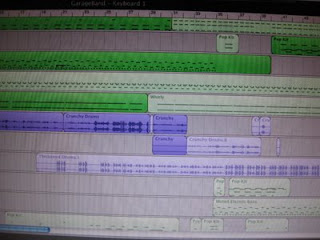 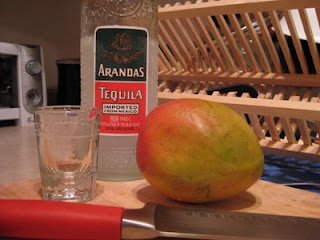 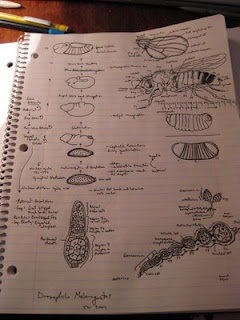 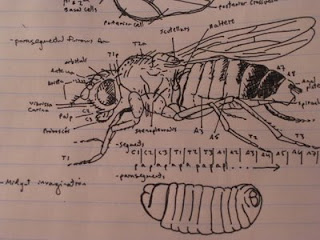 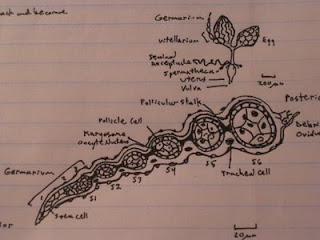 But flies are always on my mind. I'm nearing the end of a project where I've been mating flies so that they'll have one deleted gene. Next week I can see if this reversion was a success and figure out what the mutant flies are up to. I'm also screening a library of Drosophila genes against our gene to see what is interacting with our gene. We're coming at these genes from a few angles--what they do in a cell, as well as who they interact with to do it-- and then characterize what the proteins do and what happens when they don't work quite right.

We study WASp family proteins (Wiskott Aldrich Syndrome), which when not functionioning properly can cause low blood platelet count as well as immune dificiency, mostly in children (I think). But our lab doesn't study that directly. We're looking at how the genes that cause Wiskott Aldrich Syndrome function in relation to actin and microtubules, which form the scaffolding and intracellular transportation system, and trigger cytoskeletal rearrangments for structural purposes, locomotion, or intracellular transport along cables. I'm working on two of the newer ones that no one really knows much about. We all have some pretty good guesses simply because particular domains of it's DNA sequence is conserved between flies, mammals, and more primitive organisms, so it most likely does a similar job, but with important specific regulations and mechanisms that are unique and we want to figure out. Our lab was collaborating with another who works with mammalian systems to identify one of the genes I'll be studying, and another mammalian researcher found a new member of WASP proteins that's the second I'll be trying to characterize. It's pretty sweet.

And finally, Frank Zappa is rad. Especially his albums the Grand Wazoo, and Waka/Jawaka. If you like fusion like it's supposed to be played, alongside classical arrangements in the Zappa style, these are good. MOstly instrumental, which I kind of like because Zappa has the reputation of having a dirty mouth (depending on the year), yet I also don't like that there's no singing because the album Apostrophe, which was also recorded in the same years as these (1972-4) was so good. Frank Zappa is rad.
Posted by Tim at 2:39 AM 3 comments:

These are some of the pictures I drew when I was in Gambia in 2007 with the intention of coloring at some point. Now I've finally gotten around to it. Valentines with no valentine seemed like the perfect time. 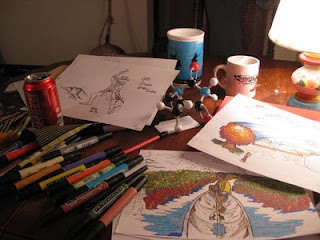 And I discovered that in order to take a good picture I should hold it up in front of my lamp. The color from the markers soaking through the paper makes the picture look electric, but then my camera's flash balanced it and the colors came out pretty true. But the lamp trick gave me an idea to build a picture frame with a lit-back housing. These prismacolor markers look crazy when illuminated from behind.
Posted by Tim at 2:49 PM 3 comments:

One of the positives about working in this lab is that I have flies in my coffee. No one here knows why they love coffee, but from what I observe, they do. I enjoy speaking French to one of two Venezuelans in our lab, who responds in Spanish that I kind of remember. I would like to practice Spanish but she laughs critically at my accent and not hers. Between tearing out ovaries and extracting DNA we have fun. It's a small lab in the middle of publishing a paper I had nothing to do with, but concerning projects I will be continuing to unfold in the next few years.

One of the projects is wound healing mechanisms in fruit fly babies. We basically burn a hole in an early or late stage embryo with a laser, and watch as it fluorescently heals itself, or not, depending on a number of factors. Mounting the embryos on a slide is a fairly delicate process. And a separate DNA identification experiment hasn't been going well lately. The DNA wouldn't go back into solution, it just sat like a fat white plug in 300ul 10mM Tris/10mM EDTA + 20ul RNase (Roche 10mg/ml stock). Just to get to that point, which is still at the beginning of this whole test, took a bit of work. Now we start over and hope it goes well this time. The problem could have been any number of factors. The best bet is that I've never really worked in a research lab before now.

You all should check this out. Look through his archives on the right hand column and listen to anything that has "mp3" after it.
Posted by Tim at 12:19 AM 1 comment: 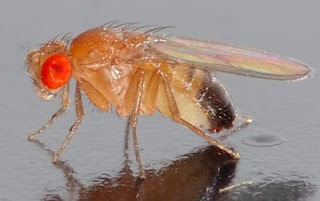 In fruit fly genetics, genes are named not by the visible, normal, wildtype phenotypic expression, but by the distinguishable mutant form that tells us something isn't how it usually should be. For example, the Curly gene (abbreviated Cy) is expressed normally as standard, flat fruit fly wings. Actual curly wings are only what we see when Cy isn't functioning properly, or when it isn't expressed at all because of random mutation or other genetic or enviornmental factors. The name is not describing what we observe everyday in normal conditions, but the resulting characteristic when normal function is absent.

Another example: Lets say I discover Matt and I need to assign a distinguishable name, one that characterizes life in his absence. I might name him Funnier (abbreviated Fnr) because things are much funnier than they otherwise would be when he's not around.

Here he is in his normal, wildtype expression. Not so funny. 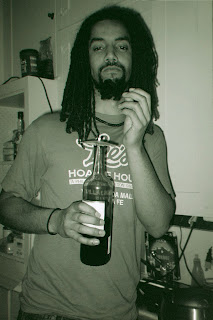