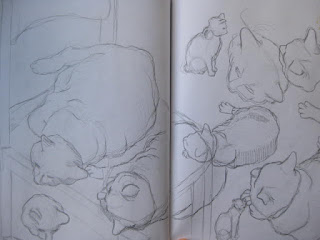 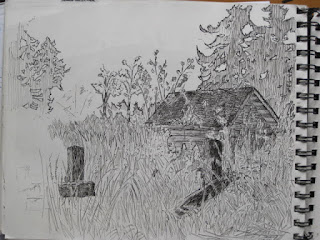 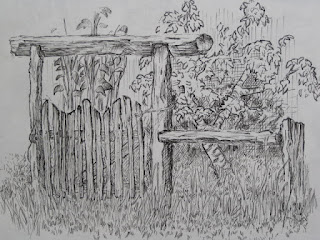 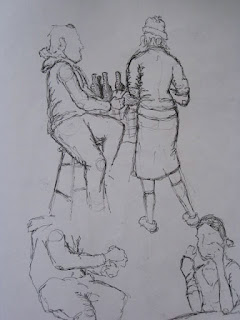 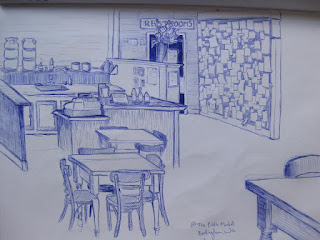 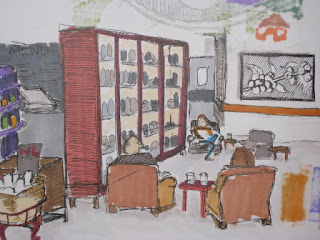 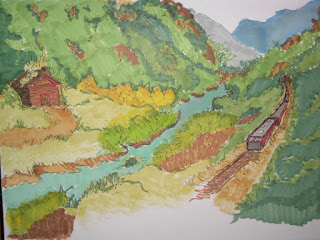 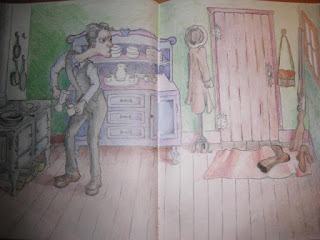 And the Fat Lady sings!

Over the past few days I drew enough flour sacks to make me sick, so I changed it up a bit. Here's my fat lady. Well, she's not fat, just rather buxom.


Someday when I'm famous I'll hire a proper voice actor. In terms of the drawings, I tried my best to squash her belly and breasts as she bends down, and to stretch them out when she leans back to call out but those could be exaggerated a bit more. Also, I want to redraw the trailing arm (the one not waving). While drawing it, I thought the natural movement would be to sort of flop around at the elbow from the momentum of her other waving arm, but when played out it's just super jerky and stuttered looking. Maybe just subtle movement would be better...or none at all. At the same time I tried to squash and stretch her belly throughout the rapid waving up and down, but that turned out jerky as well, so I'll probably keep the belly line static.

It would be fun to really work on this one, since it's so short. I could rework all the errant lines and jerky movements, put ink over the good ones and color it in. And also to add details like a face and fingers.

Here's another go at the flour bag. Before continuing I'll issue a bit of a warning: in an effort to conserve my precious animation paper as I tackle the basics, I'm drawing on top of some old drawings-- and not completely in sequence either, even though that would have made much more sense. I just pulled sheets off the top of the stack as I drew starting poses, ending poses, then put in all the in-betweens. So, you'll have to ignore the stuttering chaos of my previous jumping flour sack and just focus on the blue pencil. But I think my compulsive nature is ramping itself up to remedy this oversight. If you wait long enough the video might be changed and the text heretofore will be erased too, and all will be aesthetically pleasant with multiple flour sacks jumping about. But for now, back to the business at hand.

This round with the flour sack I considered the spacing of the drawings a bit more in order to stagger the timing. In the previous attempt my spacing turned out to be fairly even, which translated to a constant speed throughout the entire motion of initiating the jump, rising to the apex of the arc, and falling down to the ground without any of the dynamic acceleration and deceleration that happens in real life. But this time around, the apex of the arcs in the jumps are the slowest and the motion up and down are fastest, which follows laws of physics. To see this just toss a ball up in the air. Immediately upon leaving your hand the ball is moving quickly but decelerating as gravity relentlessly counters the initial force from your hand tossing the ball. As the ball reaches as high as the momentum will carry it with the given force initially applied, it slows, stops for an instant and changes direction as gravity becomes the pulling force and the ball accelerates back down to the ground.

Not that this animation is perfect or exemplifies the dynamics of our physical world, but it's at least better than the first attempt. AND I actually played this one at 24 frames/second instead of 12, which is industry standard. A little bit of planning goes a long way. The squash and stretch is pretty good, too. The stretch is rather subtle, though. Next time I'll do some experiments with super-squash and super-stretch to get a sense of what's "acceptable" to me. Finally, the rhythm of the jumping is really good. It's even throughout the whole sequence as the bag jumps further away from us. Another project could be to animate to music, trying to keep the beat.

Enjoy! (And remember to ignore the stuttering graphite flour sack to focus on the blue pencil sack hopping between platforms, otherwise you might have a seizure, in which case I can't be held responsible.)

ps: I await the day when these little animations are actually embarrassing and I half consider deleting this digital paper trail that details my development. That would only mean I'm much, much better. I suppose it already is quite humbling just searching around the internet and watching all sorts of animation from students to professionals then turning back here to see how much work is ahead of me. But, whatever. It's fun. Tedious but fun.
Posted by Tim at 12:34 AM No comments:

Here is the classic first year animation assignment: the flour sack. This is a great tool to develop a sense of weight in your drawings and get a sense of timing, through using squash and stretch. I finished this sequence in about three hours; I don't know how that fits in among beginning animation students that are actually assigned this project. If you do a simple search of other flour sacks, you'll see that mine is pretty rough (regardless the hand-held image capture).

In terms of the flow of the whole sequence, there are obvious sections where more drawings could be put in to slow down an action or where drawings could be taken out to speed it up. Alternatively, I exposed each frame twice (which is common) where some of the jumping could have been done on single exposures to make the action more actiony. Anyway, here's my first go round of the classic Flour Sack:

My cat strangling cartoon is temporarily on hiatus as I try to hammer out some of these "academic" animation basics. More cat-slapping and punching should be coming up soon. Photographing/scanning all these drawings really is no fun at all. The flour sack was about 70 drawings (doubled and played at 12 frames/second). My animation is too jerky, and the photography too shaky, for the standard 24 frames/second to make any visual sense that our brains could interpret...hence practicing the basics as they are usually taught.
Posted by Tim at 1:17 AM No comments: