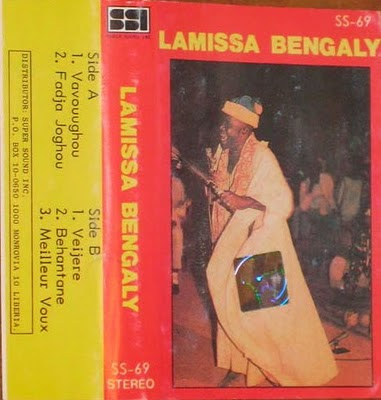 Lamissa Bengaly was instrumental in promoting Senoufo culture and balafon music around Mali and beyond.  And with that reputation behind him, I would have guessed that Lamissa was an artful and skilled player, however the cassette jacket suggests he may have used it only as a vehicle from which to address his audience, his true art. Then, left in his wake was the instrument, ready for attention.

I don't know many details about his life or how vast was his influence, only that he's from the Sikasso region and is remembered next to Bazoumana Sissoko, Tara Bouare, and Toumani Kone, among others no-less important as major influences. He even has a performance hall named after him where balafon competitions are hammered out, and Nebe Solo, a new balafon musician, paid homage to Lamissa by way of song.

The sticker in the middle of the cassette jacket and the number code printed inside it tell me that the cover is indeed original, but I'm rather skeptical of the cassette itself, no matter what the stamp says. Bear with me...

Five tracks are listed on the cassette jacket, while twelve individual tracks are actually on the tape (five on Face A and seven on Face B). After painstakingly comparing like-tracks side-by-side, down to syllables, I determined that Face A contains the whole tape and Face B repeats the three tracks listed, and at the same time presented Behantane and Meilleur Voux spliced together to make a deceptive new track; don't be fooled though. Therefore I included only those tracks from Face A that I judged to comprise the complete cassette. I don't speak Senoufo (and can't precisely say if Lamissa is occasionally singing in Bamana or not), but the only song I could hear him actually say the name of the title was in Fadja Joghou. It was in this manner, using Fadja Joghou as the landmark, that I titled the tracks.

It sounds like Lamissa is accompanied by one other vocalist who, in between Lamissa's extended phrases, sings cycling choruses. The voices sound similar, though it sounds as if the obviously featured voice (Lamissa) cuts off the other whenever he's ready to speak his mind. Each lyrical phrase and transition between the two is introduced by an accented first syllable.

Notice the vocal styling in the final thirty seconds of Meillure Voux (before it unfortunately fades out) and compare it with the old man who finally demands his turn to speak in the movie Bamako, by Abderrahmane Sissako. If you haven't watched it you may enjoy it; a half-fictional film about many relavent topics, including the strategies and effects of the World Bank and IMF in regards to African nations, unfolded as testimony from villagers and city-dwellers in court. Anyway, the old-timer might be Senoufo.

**If you're losing sleep at night because I didn't provide the full cassette, just listen to each track a few times in a row and it'll give the same effect while reducing redundancy. (Except for Vavouughou and Fadja Joghou, which play once each on the full tape).**
Posted by Tim at 2:02 AM 7 comments: