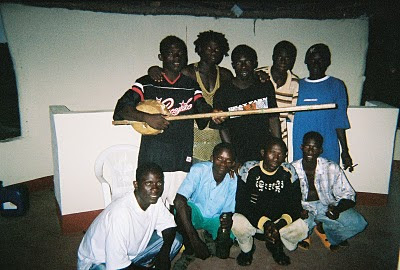 This was the last recording I made while in West Africa in 2007, a rather serendipitous occasion for a few reasons.  I left a friend's house in Casamance by road, en route to Dakar to return home and stopped in Gambia for a week.  I had previously read about the akonting here, and got the fancy idea to seek it out.   I was initially intrigued by the akonting and it's music, especially after having listened to heavy doses of griot-style music at the time, because I learned that it's music was purely recreational, as opposed to ceremonial.  So, as Shlomo Pestcoe's article indicated (click the above link if you haven't), I went to Mandinary.  Along the way I met a friendly man who was able to set me up with a home-base, so to speak.
When asking around, I was told about an old man around town who was known to play the akonting well.  I met his grandsons (pictured above) at his door-way and they told me that their grampa had been in far eastern Gambia for some time and they didn't know when he was to return, but also that they could play for me.  We picked the next night for our petite soirée and it passed with great success.
This particular instrument they were playing had three strings, only two of which are fretted; I'm not quite sure what is considered 'standard'.  The percussion behind the akonting is a butter-knife on a beer bottle, most likely Flag or Gazelle.  I think I remember the bottle being green, so it was probably Gazelle, which is actually out of Dakar--not too far away.
My editing is a bit rough on this one, some of the songs start/stop abruptly in an effort to cut out unrelated pre- or post-music conversation; please don't let that detract from the fun music.  Also, I was paranoid about the beer bottle's volume peaking and cutting while I was recording so I kept adjusting the mic level; therefore, some tracks are noticeably louder than others.
Alas, since that recording is rather short, here's another piece of Joola music to satisfy your ears; not my recording, but a more contemporary (2004 or 2006) tape I copied while in Ziguinchor, Senegal.  The band is Groupe Le Fogny; they are well known throughout Gambia and Ziguinchor.  The drums being played are the bougarabou of the Casamance region.  If you listen closely with your linguistically-discerning ears, you may notice the many similarities between the Joola sung on this cassette and the Bambara from previous posts.  But, as linguistics is not my field, I'll leave you to whatever research you choose to do in this vast internet ocean to figure out the relationship.
Here's a video, there are others (not mine) and I only chose this one because I like this singers voice the best:
**Fun facts:  The name Fogny was taken from the word efogne, which means 'to sing' in Joola (from the band website).  Also, fogny is the name of a particular grain from the Casamance region of Séné-Gambia, as well as the name of the specific region at the upper Gambie and Casamance rivers.  Read all about it and other agricultural matters concerning the Joola, buried in the dense French text of this 1984 research paper**
Posted by Tim at 10:54 PM 3 comments: 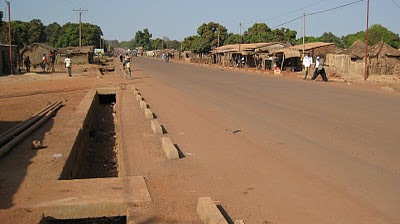 Doussouba's cassette Tayele is solid.  While my favorite song is Dielaban Tile, there is not otherwise any one song that is an obvious hit; instead the whole cassette from start to finish is consistently good.  (I'm easily taken by a pretty melody and Dielaban Tile gives it to me).
I like the instrumentation.  The kamelengoni lays down a melodic rhythm on top of which the guitars dance.  I like the freedom the djembe player has and the counter rhythms he plays.
I often wonder if the groups that recorded all of these cassettes over the years are actually a "house band," so to speak, or if the performer chooses the musicians.  Are these the same kamelengoni player, djembe drummer, and guitar players as on Aïchata Sidibe's cassette Massake (to be posted later), as one example?  They could be.  Any ideas out there?
Enjoy!
**(I don't have the cassette jacket.  Instead I offer a shot of the dusty new paved road cutting through Yanfolila.  If you continue from Papa's mechanic shop (just off screen to the left) you'll pass the school Bintou goes to.  Continuing southeast, passed the road that leads to the main market, passed a Centre de Sante, curve up the road and cut off left to head straight for the not-so-big radio tower that transmits Radio Wassoulou).**
Posted by Tim at 2:34 AM 2 comments: 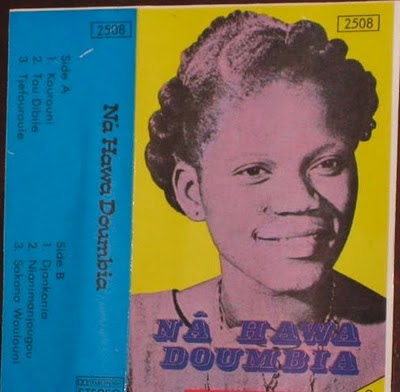 This album is simply titled "Na Hawa Doumbia". I don't have much information about it. I appreciate the simplicity of the recording; a beautifully powerful voice woven over intricate guitar, played by (I assume) Na Hawa's husband N'Gou Bagayoko. As calm as the music is, there also exists a sense of urgency that is inherent to the phrasing of both vocals and instrumentation--lots of stuccato, syllabic sounds.
To me this is another example of Malian music that characterizes the landscape beyond the Sotramas, taxis, and Jakartas that maintain the hum of very lively city centers. Together, the music with the white noise and atmosphere left between the guitar notes and singing creates a soundtrack for a lonely expanse of red-rock grit, low harsh shrubs, dust, and thoughtful introspection that I think characterizes a certain aspect of Malian culture, which I respect greatly; that when conversation has come to a pause, tea is bubbling and the top of the small blue kettle clinks with each puff of steam, donkey's wander, the wind kicks up dust and an occasional cross-country traveller speeds by on a dirt bike cutting the silence, his head wrapped and an outdated shot-gun strapped across his shoulders.
In Yanfolila this cassette (from an artist raised in Bougouni, not too far away) would be perfect for the downtime in the heat after lunch, before the sun starts to turn an evening gold and thick black plumes of smoke waft through the air as women prepare for dinner. Being here, I enjoy listening towards the end of the night when I take stock of the day and anticipate tomorrow.
For another great Na Hawa Doumbia cassette and video visit here, courtesy of the infinitely entertaining and informative World Service station. Nahawa released another cassette recently, or perhaps she only accompanied her daughter for a song on her new cassette. Doussou Bagayoko will be the subject of future posts. A ka nyi kosebe!
Posted by Tim at 2:44 AM 1 comment:

My first contributions--two, in an effort to make a small splash at this birth announcement--are actually a little harder to find. The first cassette is of kamelengoni master, Seydou Camara, recorded by Radio Wassoulou. He is a very technical player; all of his fills are spot on, his mastery of muting and opening the strings, and the metallic ping he hits on the first string for an accent could ring on forever in space. What I love most is the trotting rhythm and bounce he maintains; definitely a wassoulou sound.

I sadly did not get much information about the recording, as in for what occasion is he playing or where specifically. I presume it's in Yanfolila, but it could be from one of the villages surrounding the Wassoulou capitale. I heard the first track on the radio while hanging out at the mechanic shop recently opened by Papa Sidibe along the recently paved main road from Bamako to Guinee. There's a lick he plays in the first 20 seconds that I recognized immediately as a song I learned to play with Sekou (pictured behind the title of this blog). In the following days I tracked down the tape at Radio Wassoulou and had the DJ, a fellow Sidibe, spin me a copy. The kamelengoni (not necessarily this recording, as I didn't hear this until years after I had already tombe en amour, for some reason I can't get an accent over that e), is one of the many reasons that I fell in love with the dusty corner of Mali. Two of the other reasons are the Sidibe and Coulibaly families, of whom you can read in previous posts. More on the kamelengoni later.
**As I was writing this I took a dip in the internet ocean and came up with this. It is an excerpt from a translated text in the 70s, which I'm trying to track down. If this is the same Seydou Camara, he was a donsongoni player, but this cassette sounds more like the stylings of kamelengoni. And Seydou died in 1981 in his village, as I was told and this article excerpt corroborates, so this tape must be from the 1970s. This assumes that there isn't another ngoni player named Seydou Camara who might have created this gem, which there is, but I think he's more of the contemporary pop-Wassoulou style. Does anyone know?**

Mango number two is the formidable Sali Sidibe. I was told that this recording was made when she was quite young for Radio Mali, which is, at least now, known as our beloved ORTM. Does anyone know more than that? I know one song is about trees, and I think I remember being told it was about deforestation, as people go out into the forest and cut trees to sell for stove-burning. I like the instrumentation, and what sounds like a synthesized snare drum actually works very well, but judging by the hi-hat it could be a real snare. I always like flute and soku, and of course the kamelengoni. Track two opens with a rhythm popularized by Allata Broulaye's song Sabu. I've come across many stories about the true "origins" of popular kamelengoni, mostly parallel stories giving different names more weight. I'll get back to that later. Enjoy! Leave comments.
Most of the tapes I will present were kindly spun by Bengali in Banjul. He loves Ganda Fadiga. Most of that back wall of tapes were Ganda Fadiga performances. At the time I didnt realize how much I liked him as well. Perhaps a future trip will correct this terrible erreur. 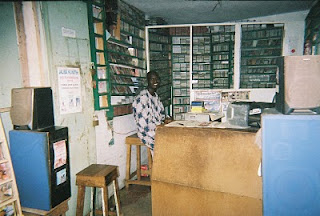