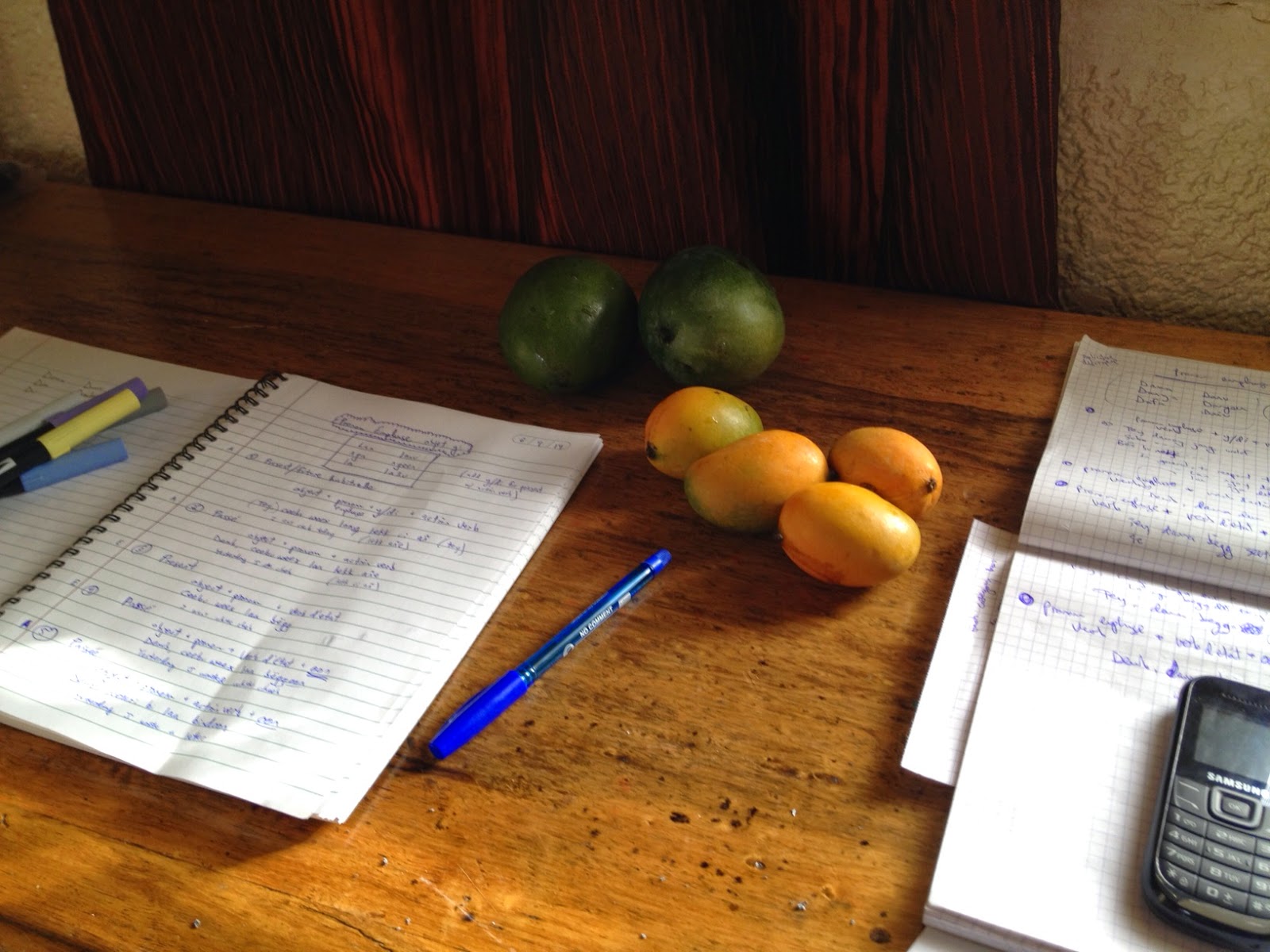 This first week in Dakar has been a whirlwind orientation about all of Tostan's work. I thought I knew what type of work they did (abandonment of Female Genital Cutting, (FGC)), but I quickly discovered that is only one small part of it. Tostan is easily pigeonholed as having this single issue focus (because they are extraordinarily successful at it), when in reality their success in changing the cultural psychology surrounding this social norm, towards the abandonment of harmful social practices, is only one result of their commitment to ground-up community empowerment, where the communities themselves direct their evolution.

The past three days of orientation were at the Center for Capacity Building and Sustainable Development in Thiès, the national headquarters 40 miles outside of Dakar, the international headquarters where I work with the communications team. Today we drove out to a village that completed Tostan's education program, and a second program that reinforces better parental practices. When we arrived there was a huge group of people waiting, playing make-shift drums on an overturned stainless steel bowl and 10 gallon plastic tubs. Individually the rhythms the three drummers were playing seemed sparse and erratic, but together they swirled into the classic sabar sound.

The gathering was organized specifically for the four of us so that the community of Keur Thiam Sawaré could share and boast about the changes in their community since the Tostan program, and their plans to continue self-sustaining development projects so that we, the new volunteers could see how the programs actually function in the field. Needless to say it was inspiring. I even got to address the gathered crowd after their presentation around a board, with chairs assembled in the sand, entirely in wolof, which was really just two sentences but they got a kick out of it: Man itam, am naa yaakar yi. Bëgg naa gis Keur Thiam Sawaré jël nañu seen futur bi. (I as well have a hope. I want to see Keur Thiam Sawaré take their future). I learned the word yaakar that day from one of their songs. The beauty in Tostan's model is that communities direct how they learn: song, dance, formal classroom, group discussion...the main goal is delivering information communities want to know in a way that they want to learn. Tostan's projects are not directive. Tostan reacts to goals defined by individual communities (who work in broad networks across regions) and supports access and logistics to getting information. Each community who chooses to collaborate with Tostan  works with a trained facilitator and elects a group to manage community projects.

Some of the other amazing programs that get overshadowed by the increasingly successful abandonment of FGC project includes: working in prisons to reintegrate released detainees into their communities as productive members of their social networks; reinforcement of parental practices; a child protection project that in part works with Islamic religious leaders and the Senegalese government to restructure, and support koranic schools, a foundation of Senegalese culture, in order to protect young children from forced begging and poor living conditions; using mobile phones to teach literacy; fistula; and teaching project management and economics through a microcredit system that fosters self-sustaining small businesses in rural communities. It's amazing how thorough their programs are and how desired and well-accepted they are in communities.

It is too easy for me to take for granted that we learn things like family planning and sex education starting in grade school, and we become mathematically literate early on, preparing us for skills like budgeting and project management, even at a basic level. The public sector in much of West Africa is unable to provide resources to achieve these skills, which is where many NGOs, including Tostan, and private funding play a huge role. They enable communities to achieve their own success by empowering them with tools to manage their success, and support communities through their efforts to achieve good health, community governance, and income generating projects.

Next week I will start working in the office in Dakar. My role with Tostan is exactly what I was hoping it to be: animating existing educational pamphlets used in the program in order to reinforce education modules; illustrating "best practices" regarding other topics that encourage stronger brain development in children, and producing graphics for social media that highlight their work beyond FGC.  We'll be developing projects that are similar but different to this, which they call Edutainment (a word I don't particularly like, but accept as field-specific jargon).

Here is one graphic I previously produced for Tostan for the International Day for the Abandonment of FGC: 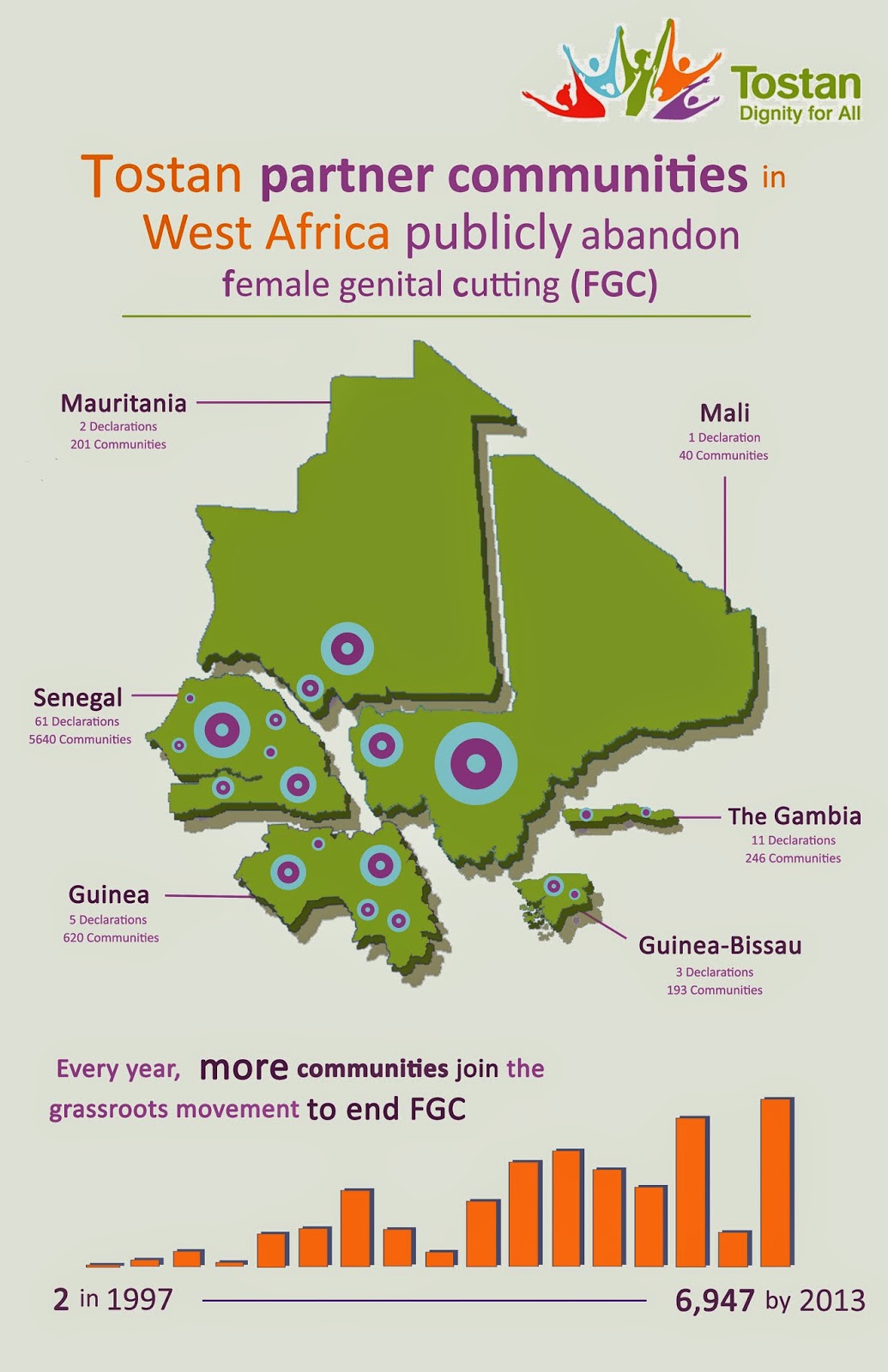 And happily, in order to get artistic material, sound, ideas, etc, I'll be able to travel a lot to other regions and into rural communities, which is where I like to be. Then I'll be able to go back to Dakar after a few days or a week to work on projects and enjoy conveniences I never knew Dakar could offer when I was here previously, like sushi and delivery pizza.

Also, it's fun to be on email lists with some of the leaders in development theory and "social norm" theory, whose work I've been reading over the last few years, and to have them support my specific arts-based project within Tostan.

Oh yes, and it's mango season, which means it's my favorite season. If you're in need of good mango music, download this and read this.
Posted by Tim at 4:26 PM