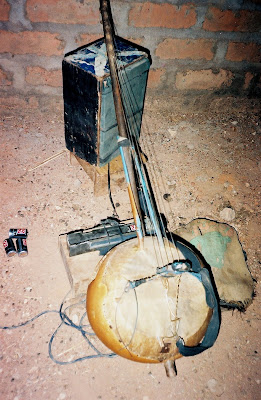 really sounds good! i always wonder if someone had just said "listen to this" -- would I have the same impression...(?) i think most of the time probably i would... but in any case, after i heard it, i seem to feel a depth of expression and a *SOLIDNESS* that only the really great ones can bring forth... i'm not surprised the dude is such a big deal, because HE'S GOT THE GOODS!!!

Could you give me the original order?

I seem to hear the voice of Nabintou Diakite behind Oumou.

I would comment something more but first want read the notes of L.Duran.

I ordered the titles as think it should be and for me the listening is more satisfactory.

To my seems this cassette is:

The songs Broulaye record with Oumou Sangare at her house in Bamako.

If you listen to the voice of Oumou does not seem to correspond to thirteen to fifteen years old when the recording the Lp((81-83). (Oumou is born in 68-69 according to different sources)

hello, I know it is a long time since this was posted but maybe this will help on the "dueling" cassette front.

this cassette seems to be the one for sale here:
http://firstworldmusic.org/00-archives/APRIL-08-2012Archive.html

maybe the other "specialist" cassette, is from this lp that was released by maikano (mailps 1024, 1981) in ivory coast:

there seemed to have been a series of these, here's another title:
DJELIMADI SISSOKO - Folklore du manding
http://www.cdandlp.com/en/djelimadi-sissoko/folklore-du-manding/lp/r2300062028/

Thanks Zim, if you look attentively, you will see that the page where we see the k7, belongs to the playlist, of an on-line radio.

If I have not seen wrongly, the songs order is this.