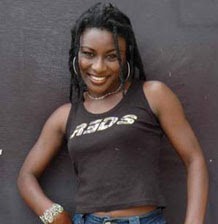 Let us take a slight detour away from the arid land of Mali and venture into the just-as-arid land of Thiés, Senegal.  Enjoy the relatively relaxed mbalax of Masane and Wa Flash.  My friend Jules Diop respected Masane because her hair was real, but I suspect that some of his appreciation was reserved for her voice*.
At the time I spoke Wolof well enough to explain the vile things I was willing to do to the mothers of would-be pick-pockets, and that I would eat their days (demai lekk sai funn) if they kept bothering me (I learned these vile words from children or the parents yelling at their children in Dakar).  However, as much basic conversation that was to be had, I could never fully understand the lyrics of mbalax, nor did I ever really fully appreciate mbalax, in all its sugary, treble-heavy sabar madness and glory.
Nevertheless, this is one tape that I do enjoy.  Some songs are a little blown-out.
My favorite song is Sincerité.  I don't know exactly what Masane is singing when she says someone is crying, but when she sings "mingi joy", she sings "he/she is crying", which would make sense in a song titled Sincerité.  And she implores someone, presumably the husband and father in the video, to wanko--to show it, sincerité.  My best guess is that Masane is singing about anonymous woman married to typical man who refuses to show any sympathy to the woman's situation (the video doesn't reveal much, so perhaps polygamy, which is a relevant topic today) and later in the second little segment between the dancing, the father not being sympathetic to the daughter's situation with her young suitor.
'Soxna' is either the word for woman or a respectful word used to address women.  For example, to get the attention of a woman working in a little shop I'd address her generally as, [Hey] woman...soxna si ([hey] this woman).  I'm pretty sure adding si, because soxna starts with an 's', makes it a close noun, like saying gorgui, where gor is the word for man, and gui is the grammatically correct thing added after. Since gor starts with a 'g', gui is what follows.  I'm not a linguist.  However, it was explained to me by a linguist that modern Wolof has generally abandoned the agreement between noun and grammatically-correct-thing-added-after-the-noun, and made them all neutral, in a sense (I'm not sure they took a male/female sex), in that, now nouns are mostly followed grammatically with a 'gui' rather than agreeing with whichever letter the noun starts with.  Like I said, I'm not a linguist, so that may have been terribly confusing.
Enjoy the music.  More mbalax to be posted later.
But before I go and since I'm feeling rather mbalaxy right now, here's a youtube video of one of my favorite songs, coincidentally enough also concerning women's plight in Senegal.
*and that Masane is very attractive.
Posted by Tim at 1:03 AM

You put two examples of soft Mbalax(something like the Anglo-speaking called pop-music), Wa Flash based in mbalax mixed with Western sound (the wrong way) and The Master Ouza, creating from tradition (the road to modernize the sound but Senegal to 100%.)

Now I'm listening to Masane but I don't like anything,thank you for bringing mbalax to the blog, but this time we do not agree.
Jajeef.

I've been considering your comment and decided that in my opinion, most if not all mbalax today sounds like what you call "soft" mbalax, such as this tape.

I don't think Wa Flash or Ouza are any sort of outliers in Senegalese music, as your distinction of 'soft' suggests. Rather, I think they're right in the middle of it. If one were to step into Dakar now, these two groups would get lost in the shuffle of hundreds of others that sound quite similar, which is to say they all sound like mbalax.

I definitely don't think they're adopting a Western sound. I think they're playing music specifically for Wolof people the way the Wolof people want to hear it (including the multitude of other ethnicities in Senegal who understand Wolof), and that this music uses keyboards and drumset, etc, to achieve that. I only think this based on the videos playing everyday and night on RTS and the packed nightclubs, which are presumably seen only by Senegalese and a few travelers.

Whether or not you like it is a different point that shouldn't be challenged by anyone, but I only want to say that I think these two examples are as mbalax as any other group in Senegal today.

That's only my long-winded opinion. Anyone else out there have any thoughts? I see quite a few people downloaded it.

Normally not comment on when an album disappoints me.

I personally like all kinds of mbalax, even some without much quality.

I wanted to give my opinion,for the case if someone does not know the mbalax music was not disappointed and so dismiss in their menu this kind of music.

The term soft is not derogatory, I have compared with Pop-music,that is music to eat all day, other than the mbalax of wild dancing.

I love OUZA but in the case of Wa Flash, some cassette of Viviane and some new singers want to make a French or American style to sell more abroad, and only manages to change the taste of young people in Senegal.

But I recognize that even Wa Flash, have great moments.

thx for sharing, waflash kicks solid butt, speaking of that I'm in love with masane's, lol

This tape really sat well with me. Great work Wassoulou, much obliged!

It's a great tape whom I used to like back then. People have fifferent tastes I guess